A prerequisite to use DNA barcoding is the availability of comprehensive and reliable reference barcode libraries. Therefore, BopCo also contributes to populating DNA barcode databases of taxa of policy concern. To this end, BopCo produces new DNA barcodes, which comply with the Barcode of Life Database (BOLD) standards and which are made publicly available through the BOLD platform.

Below you find a listing of the different projects BopCo is involved in. If you like more information on a certain project, just click on the provided link to go the project page listing additional details including partners, publications and databases. Apart from the running projects, BopCo is constantly looking for partnerships with other taxonomic experts, research teams, governmental agencies, etc. If you are interested in collaborating with BopCo or just want more information on potential joint projects, please do not hesitate to contact us for more details. 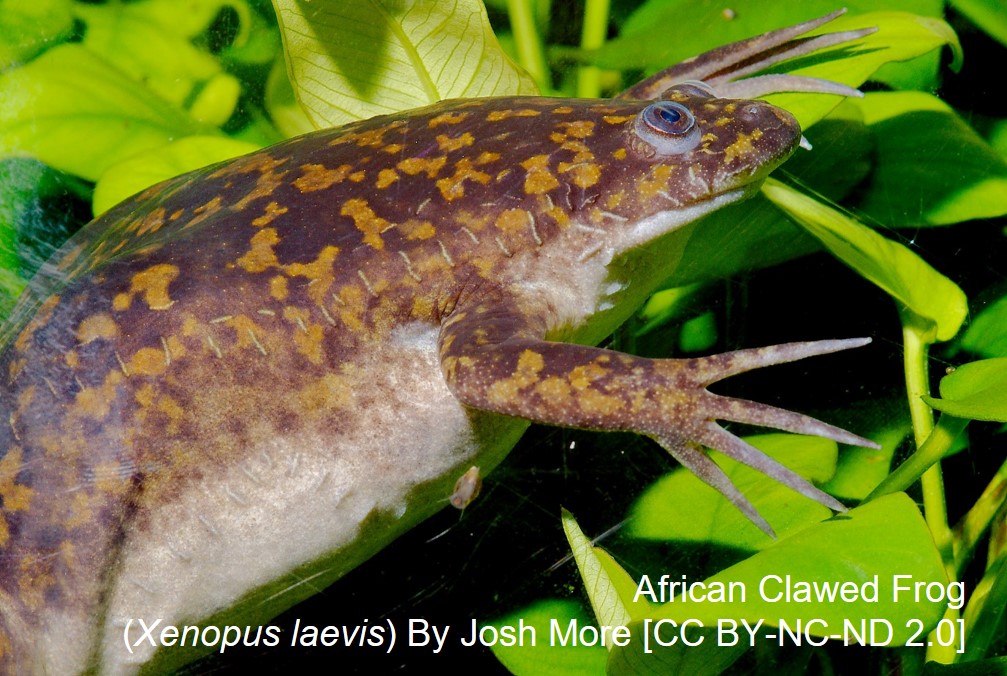 The African clawed frog (Xenopus laevis) is a popular model organism in many laboratories and has been used for scientific and medical purposes worldwide since 1930. Following escapes and/or releases from captivity, a spread of Xenopus laevis to natural ecosystems was registered on most continents. The species displays invasive capacities and, like the American bullfrog (Lithobates catesbeianus), is a voracious eater. In the absence of natural predators, their population densities can increase quickly causing damage to local aquatic ecosystems. Its invasive success in northern Europe is, however, limited by...... Show more

Alien terrestrial planarians have made their way to Europe in the past. Bipalium kewense and Dolichoplana striata are considered ‘old invaders’ from Asia and have been discovered/encountered in Europe since the 19th century. In the past decades a global trade in exotic plants has been established. As a result land planarians have been found in gardens, orchards, stores and greenhouses across Europe. These land planarians are predators of ground dwelling invertebrates and can severely disturb soil ecosystems, which in turn influences agricultural processes. Due to this potential danger, Arthurdendyus triangulatus .... Show more Non-native species which are being introduced into Europe, whether by accident or deliberately, can be of policy concern since some of them can reproduce and disperse rapidly in a new territory, establish viable populations and even outcompete native species. As a consequence of their presence, natural and managed ecosystems can be disrupted, crops and livestock affected, and vector-borne diseases or parasites might be introduced, impacting human health and socio-economic activities. Non-native species causing such adverse effects are called Invasive Alien Species (IAS). In order to protect native biodiversity and ecosystems, and..... Show more Rove beetles are early-stage visitors on corpses. They deposit their eggs on the corpse and the emerging larvae feed on fly larvae. The duration of development from egg to adult is species specific and can be used in forensics to estimate the post-mortem interval. A correct identification of all rove beetle life stages is thus important for crime investigators. This species identification can be facilitated by DNA barcoding, provided that a reliable reference library is available. At present, the forensically important species of Western Europe are not, or only poorly, represented in public sequence databases. In order to remediate this gap, this project..... Show more Since mosquitoes are known vectors of pathogens of significant public health concern, the Medical Component of the Belgian Armed Forces is investigating the Culicidae biodiversity at foreign sites where the Belgian Army is deployed. BopCo takes part in this project by providing DNA-based identification support to the Laboratory for Vector-Borne Diseases of the Queen Astrid Military Hospital. After a preliminary thorough exploration of the available DNA reference databases, considering the region of deployment, adult mosquito specimens are identified to the lowest possible level using the DNA-barcoding technology. Important..... Show more

Identifying gastropods of parasitological concern for pets in Greece Recently, terrestrial snails and slugs acting as intermediate hosts of parasites infecting humans and pets, have gained special attention because several of the nematode parasites they transmit, are spreading among domestic and wildlife populations throughout Europe. In order to survey the prevalence and expansion of these parasites, it is necessary to identify their intermediate snail and slug hosts as accurately as possible..... Show more

Exploring the Bushmeat market in Brussels The European Union prohibits the import of meat (products) unless specifically authorised and certified as being eligible for import. Nevertheless, various scientific papers report that passengers from west and central African countries illegally import large quantities of meat, including bushmeat, into Europe via its international airports. They also suggest that African bushmeat is an organised luxury market in Europe. In response, BopCo..... Show more

Within the Entomology Section of the Royal Museum of Central Africa, species identifications of a number fruit fly samples are performed each year. When a morphology-based identification is not possible or in need of validation, the molecular identification is conducted by BopCo. Within this framework, and in partnership with Citrus Research International, previously unrepresented species have been barcoded and these COI sequences are now made publicly available through the online reference libraries. In addition, several publications illustrating the usefulness of this tool have been produced..... Show more Due to international trade, tourism, and climate/ecological changes, mosquito species can be transported, dispersed, or introduced and eventually become established in new territories. Since 2017, a nationwide three year monitoring project started, which is funded by the Belgian federal authorities and the federated entities, and aims at detecting and evaluating the occurrence of exotic mosquito species (EMS) in Belgium. Monitoring activities started with 23 points of entry (PoE) using adult trapping, as well as egg and larval sampling. EMS were found to enter Belgium effectively through different introduction pathways. The aim of the..... Show more The Brussels Airport Company and the military Air Component of the Belgian Army are in need of accurate identifications of birds involved in birdstrike incidents. In collaboration with RMCA’s taxonomic experts, we investigate feathers to identify the bird species, both by morphology and molecular techniques. In case of blood traces (or unidentifiable remains), DNA-based species identifications are necessary since no morphological characteristics can be studied. Based on the provided species identifications.... Show more

Authenticating fish and seafood products for sale on the Belgian market Due to the international importance of fish and seafood trade there is a large potential for (un)intentional misidentification and/or deliberate fraud through species substitution. Several studies worldwide indicate that this is common practice, especially for processed products which lack characterizing morphological features (e.g. fillets). These studies also seem to indicate that the scale as well as the product most prone to mislabelling differs by country.
BopCo therefore conducts an exploratory survey to identify those fish and seafood products most subjective to mislabelling in Belgium. Fish and seafood were sampled at various supermarkets and..... Show more There is evidence that infections of metastrongyloid lungworms that infect canids, felids and humans are spreading beyond endemic areas by means of the parasite’s most common intermediate host, viz. slugs. These infections can cause severe symptoms such as systemic bleeding disorders in domestic dogs.  Nevertheless, only a few studies are investigating  the prevalence of metastrongyloid lungworms in their natural intermediate hosts in Europe. Therefore, an epidemiological study examining slug populations in Germany was undertaken by the Institute of Parasitology JLU Giessen..... Show more

Investigation of the population genetics of Aedes japonicus (Diptera: Culicidae) in Belgium

Within the framework of the MEMO project (for further details, click here), exotic mosquito species (EMS) are actively monitored to understand the levels of risk that Belgium faces with regard to the invasion and establishment of these EMS and to define the control measures that need to be taken to prevent or eradicate such invasions. Different Aedes species are (on occasion) being detected in Belgium, including Aedes japonicus. A previous eradication program executed in 2014 aimed at eradicating the locally established population found in the southern region of the country. However, the species was detected again recently at the.... Show more Policy Concern Category: Forensics
Forensic entomologists use larvae of flies to establish the interval between the time of death and the discovery of the body (post-mortem interval). The identification of these flies is decisive in forensic casework but often hampered by difficulties in species identification because larvae may lack morphological characteristics. The use of DNA barcodes can facilitate the identification of forensically relevant fly species, to discriminate from non-forensically important species. This methodology relies on the availability of a representative and comprehensive reference library of DNA barcodes. BopCo, in collaboration with the Joint Experimental Molecular..... Show more

Approximately 70% of the Culicidae collected in Belgium in the framework of a multi-year monitoring program (see MEMO project for more information) were found to belong to either the species complex Culex pipiens s.l. or to Cx. torrentium. These species are hard to distinguish based on morphological characteristics. Additionally, the Culex pipiens s.l. complex also includes Cx. quinquefasciatus, which is an important exotic disease vector with high invasiveness potential. Molecular tools including DNA-barcoding and size fragment analyses, however, can be used to distinguish between the species included in this complex, as well as between these and..... Show more